After an intense 6 week course of MBA 707, a rude introduction to a derecho, and a dastardly cat named Cocoa eating the powercord cord of my Mac Book, I have finally begun writing again.

The MBA is something I feel is needed to excel at my job and therefore a necessary evil.  No way around it, I make good living, but I always want to do more and I’m not satisfied with status quo when it comes to, well when it comes to anything really.  Therefore, I must forge forward and add letters to my tittle.

If you don’t know what a derecho is, all you need to know is it comes, it kicks your ass, takes your power, and freaking spoils all the food in your fridge.  Derecho, you suck and I’m glad you’re a “once in a generation” storm in south Jersey.

For those of you who are interested, Cocoa the cat is now subject to cruel yet necessary water gun therapy.  It’s exactly what it sounds like, and it works, one apple knock-off power cord later.

So the short story I was working on before all of this happened is in a coma, basically dead.  For me story ideas are like burning embers, you best use it to start a fire or it will simply turn to gray ash and die, and that is what happened.

Now, I am close to finished with a first draft of a story tentatively titled “The Broken Art of Perfection.”  The idea of the story came to me from an article I read in the NY Times about dream therapy.  I’ve enjoyed writing it so far.

In the mean-time a couple of stories have been rejected.  Dark Discoveries said “Always a Soldier” was quite well written, but not for them.  Black Static, which has become my great white whale, simple form rejected me on “Reflections.”

Heavy Metal Magazine, upon inquiry to my submission “The Cost that Lies Between Heaven and Earth”, said “I assure you that everything that is sent in is reviewed and we respond only to those works we choose to publish.  Please also note that we are working on magazines several months in advance of publication so don’t despair it often takes many many months for a project to be selected for inclusion in future magazines.”  I have no idea if that means I was rejected or not?!

At last issue #15 of Morpheus Tales, a UK quarterly magazine of horror and science fiction, has arrived!

“It’s a beautiful casket.”
The story begins as a boy finds a key around his dead father’s neck as he lays dear old dad to rest. Curious as to what secrets the key holds he begins a surreal journey through the present while using clues from his past to ultimately arrive at an answer he surely wishes he never found.

My story also brags art from the talented Vladimir Petkovic.

A free preview of the issue can be found at:
http://issuu.com/morpheustales/docs/mt15preview

You can order the issue here:
http://www.morpheustales.com/

The cover art of #15 reminds me of the cover Berni Wrightson did for the Spiderman graphic novel “Hooky.”

Illustration from The Key 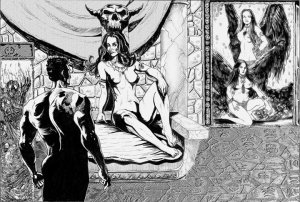 I was fortunate enough to touch base with Vladimir Petkovic who illustrated my short story “The Key” coming up in Morpheus Tales.

Morpheus Tales is of on the UK’s finest Horror Magazines and I am pumped to be published in its pages. However, we need to wait until January of 2012 to see it in print. I can’t wait.

I love the interpretation that Vladimir has made of a scene in my story. Obviously I can’t get into it now but come 2012 I’ll be happy to go over the scene and the gorgeous illustration.

Vladimir is a talented dude. Check out his work here (I also added him to my blogroll):

Everyone is a critic: Infestation

Because I haven’t written a short story in a while I figured I would collect some of the positive and negative comments of my published stories. I will leave out comments by anyone I know, because lets face it, they are probably considered ringers.

Thankfully there are more good than bad reviews. Just an FYI, if you plan to check out the story, there are spoilers in the reviews. First up, “Infestation.”

“this one had me covering my eyes and gritting my teeth.It takes a lot to get this reaction from me,but if anything will-its large flying flesh eating insects. Excellent performance from the narrator,keep up the good work psuedopod.”

“Insects-in-your-body stories are always among the most horrific, and this was very well done. Only way to make it worse is to involve genitals a la Scott Sigler’s “Infected.”
Kudos on the story, and doubly so for the reader!”

“oooooo, foo, this one made me nauseous. Yet I couldn’t turn it off. I hate you all.”

“Makes me afraid of the strange looking plants that pop up in my flower bed. I think I’ll go pull them up and burn them now…”

“Loved it; wished it was longer.”

“Absolutely horride! I loved it! Keep up the good work!”

“Wow. I haven’t had that kind of physical reaction to a story in quite a while. I was driving while I listened, and was squirming, flinching and writihing while trying to steer. Made it to the studio, thanks to cruise control.”

“Very descriptive story. Kept me interested until it was over.
Very scarey story. Right up their with Stephen King.”

“I hope I can sleep tonight… the reading of this was amazing. ugh! Amy….ps.. I think I’m going to puke.”

“Gentlemen, excellent episode! THIS is the kind of story I’d write if I was about 160% more talented than I am. Kudos, Mr. Piskun!”

“Yukkkk. Great episode that made me uncomfortable.”

“I listened to this story twice it was so good! I loved the narrator and the story was just chilling!”

The Bad (and Ugly)

“Meh. It’s been done before, and done better. One thing I did like was the way that the narrator lapsed into religious metaphor at the end – it was a nice character touch that, when he’s pushed to the point of breaking, that was emerging”

“The commenter who called it graphic and intense was absolutely right, however, I was a little disappointed. This story was my first introduction to Pseudopod, and I have to say, my first reaction was “Haven’t I read/heard this before? People are still writing/reading stories about bugs crawling under skin and eating people alive?” I know it’s a tried-and-true horror theme, but I just didn’t think this version added much. I seem to be alone in this assessment, though, as this seems to be a very popular story!”

“In all honesty, this is probably one of the stories I’ve liked least so far in Pseudopod. (I’m working my way back; I’m down to the sixties now.) It was just gross-out horror for the sake of gross-out. Don’t get me wrong; the language was evocative and cringe-inducing and the reading was spot-on, but “bugs under the skin” is one of the old reliable tropes and this story didn’t really do anything interesting with it. Heck, it doesn’t even give it a decent foundation.

There’s no reason for the bugs. They’re just… there. From a plant the girl scouts were selling. So presumably there are now dozens of homes being filled with these plant-bug monsters that breed faster than bacteria. I guess that would be scary if the bugs weren’t so ludicrous. The whole thing is wildly implausible, but doesn’t have the resonance of a strong thematic/symbolic structure to give us a reason why these impossible creatures exist. I’m okay with hallucinatory, surreal action, but I’m less okay with it when it doesn’t serve any purpose other than increasing the shock value. I was reminded of “Sealab 2021″ and the discussion of putting human brains into robot bodies rapidly devolved into requests for an Adrienne-Barbeau-bot with chainsaw hands. The story became so unrealistic – after such a lovingly-detailed ’slice of life’ at the beginning, too – that it stopped being scary and just started seeming kind of goofy to me
It was well written, and very well narrated. As I said, I enjoyed it, I just didn’t find it special.”

My Issue of Necrotic Tissue #12, featuring “Little Pieces”, has arrived in the mail. I am quite impressed. Its a gorgeous soft cover that comes just in time for Halloween.

Little Pieces is one of my favorite stories. I tried hard to make it a character driven story submersed in a world of horror and suspense and I think it worked out well. The story is about a deep love that is lost and depths the main character will go to to reclaim it.

“The Key” to be published in Morpheus Tales

One of my favorite stories has found a home. “The Key” will be published in a future issue of Morpheus Tales, a beautiful looking magazine of horror, science fiction and fantasy.

In “The Key” a young man finds a key in his father’s coffin that he hopes can answer the mystery of his father’s difficult life and their strained relationship. Will he find what he is looking for or regret that he ever lay eyes upon the key? You’ll have to wait until 2012 to find out. That’s right 2012! Hey, good magazines have a long waiting list.

In the meantime, while you’re waiting, please check out:

“‘Til Death” my vampire story available in Dark Gothic Resurrected Magazine, which is chock full of Vampire goodness. You can download it for a measly $5 or buy the print copy for $10 here:

“Cookers” a story about a family making there way through a world of overheated, man-eating zombie. Oh, the vegetation has mutated to eat flesh as well. This is truly an After School Special loaded with lessons in family values. Check it out FOR FREE here:

“Cookers” Published in Tales of the Zombie War

My 4th publication is now available on Tales of the Zombie War. If you like horror of any kind its a real nice site.

Although this story does have a unique type of zombie the main focus is on a father, daughter and grandmother and their family dynamic in adversity. Adversity being flesh eating plants and off course zombies.

I enjoyed writing this story and so far the comment section has been positive. Give it a read and let me know what you think.

Here is the address or click on Cookers over on the blog roll.

My story “Little Pieces” was selected today for issue#12 of Necrotic Tissue due out in October 2010. Necrotic Tissue is a quarterly print magazine and I’m thrilled to be in it.

In “Little Pieces” the main character is dealing with the death of a close friend so he does what any of us would do. He tries to bring her back from the dead. This story was one of my favorites. I wrote the first draft in about two sittings which I don’t think I’ve ever done before and I really enjoyed the ending so I’m glad it found an excellent home.

Now we wait. Until October. More details to come.

Painkiller is up on House of Horror 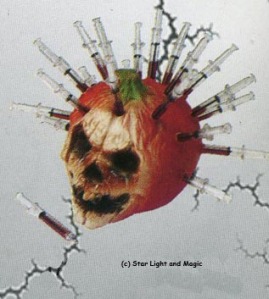 Let me know what you think. I found a couple of editing issues and I e-mailed the editor so we’ll see what happens.