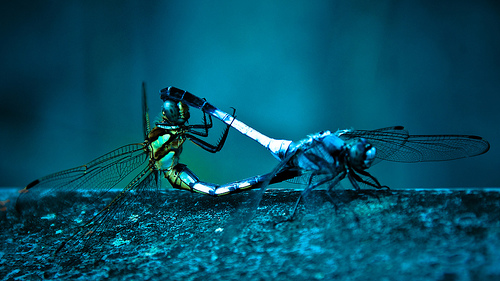 Here is another story that didn’t quite cut the mustard.  Although enjoyed by my peers; my teacher thought it was more of an exercise that didn’t really tell a full story.  You be the judge.  Let me know what you think.

I enter the room to see two people fornicating, their naked skin slick with sweat. Salty perspiration born of lust stings my lips and teases my tongue as bodies slide across each other.  Skin meets skin and blue sparks leap from their intertwined and thrusting flesh in the form of racing hearts and moans.  They fly and crawl like fluorescent insects and energize my brain, stimulating places I feared to go.  A vision in my minds eye I see my boss standing over me preaching, gloating, and I stab him in the chest with the scissors in my draw.  Did this happen?

The electric insects crawl around my groin causing it to throb with desire.  I move closer to the lovers and try to see their faces. The man looks famous, I think I know him but his features blur and contort in circles of haze and static.  The woman has no features; she wears a mask of peach colored flesh.  I walk toward them an eager participant in their sensual dance of lust.  The pulsing skin and swirling tastes and smells take me away.  Then I feel the whispers.

The voices caress my skin and warn me.  They find the quickest route to my brain and articulate through my nerve endings and speak,  “It’s over.”

The floorboards splinter and crack and I fall.

The darkness sets upon me, palpable like a sheet of velvet black.  I’m weightless and my heart presses against my chest.  I can feel my life flash before my eyes and oddly I see nothing.  With the force of a thunderclap I hit the ground.

I’m in a concrete basement.  The damp smell of mildew and rotting newspapers tell me I’ve been here before but I can’t remember when.  The basement is vast and dark illuminated by a single light bulb hanging from a wire like a head in a noose.  I can’t see where the darkness ends.  Then my skull itches, I feel the voices again.  “Run!”

I feel breath on my neck, hot and thick and I scurry off into the darkness.

The voice is booming and primal, a lions roar from beyond the grave.  “You can’t run from me here.  Make it easy on yourself.”

I know the voice is right.  It would be easier to stop running but I don’t.   I won’t.  I flee into the endless void before me, the light from the swinging bulb behind me growing fainter by the step.   I feel my pursuer behind me, cold and oppressive like a drop in pressure.  I run faster and faster never running out of darkness until finally the sensation of being hunted fades.

Ahead there is a dark blue light making its way through the darkness.  Wearily I make my way towards it and notice an old man hunched over.  He is the source of the radiating blue light.  It flows off him like water and streams in all directions, gravity all but nonsense.

Liquid cobalt makes its way through the deep wrinkles on his wizened face.  A gentle breeze from nowhere makes the small tufts of thin grey hair on his head list back and forth.  He opens his mouth to answer me and belches as his teeth tumble from his mouth.  They hang before him, like white pears and broken glass suspended for just a moment, than fall into the darkness.

Once more the voices in my nerve fibers whisper and tell me, “He’s back.”

I feel the sting across my back and fall to knees screaming.  My voice gets swallowed up by the void around me.

“I told you there is no escape.”

He was a hulking ten feet tall.  His armor glowing tan and brown, patchwork pieces of steel stitched together by what appeared to be bone.  The helmet that covered his head shimmered hypnotically and shined with the colors of fear.  His face, if he had one, was hidden in the helmets shadow.  The whip he held in his hand I had already been introduced to.  It was made up of various barbs and stingers, bees, wasps and scorpion tails were among those I recognized.  The whip writhed in his hand as if alive; it tasted me and wanted more.

The wrinkled old man opened his mouth to speak again and more teeth tumbled out.  This time he pointed behind him and I saw it, a tiny bright light, like a star, off in the distance.  I sprinted of towards it.

I could feel my pursuer getting closer.  Despite his steel armor he made no noise but I knew he was right there, the same way you know that the kid who just ran out in the street after his ball is going to get hit by a car.

The whip rushed past my ear.

I kept running and the light grew closer taking shape into a door.

The voice screams at me now, “Run, get to the door.  His name is Reverie and he is going to kill you.”

I can see it before me now, the door shimmers like a white piece of glass that offers no reflection.

Reverie’s whip snaps and wraps around my forearm.  The stingers latch on to my arm and I scream as my skin corrodes and flakes off leaving nothing but darkness where flesh and bone used to be.  I fall to my knees and Reverie towers above me.  He stands between me and the door

“Nasty little creature” he says, “not many make it this far.”

“You are nowhere soon to become nothing.”  His voice booms and echoes impossibly in the emptiness.

I look at the darkness that used to be my arm.

“Filthy little dream thing.  You can’t leave this place, come with my or I’ll render you inert with my whip.”

Dream thing.  The words sting worse than his whip and my heart turns cold.  The voice runs meekly up my spine and whispers to me the confirmation I don’t want to hear, “It’s true.”

Reverie laughs loud and hard shaking the darkness.  “If I could only add another stinger to my whip every time I heard that one.  You are a strong one though, one of the toughest dreams I’ve ever encountered; I’ll give you that.  Your creator has nearly had one or two get by me before.”

“The door is the way out.  Others have escaped Reverie’s whip.” the whispers inform me.

“All dream creatures think they’re alive.  Your nothing special.”

“You are!” The words run like electricity through my nerves.  Azure currents trace the outline of my missing hand and forearm.  The shadows shift uncomfortably inside Reverie’s helmet.  The light of the door behind him pulses to the hammering of my heart.

I leap into the air with both fists, one real the other ethereal, and crash into Reverie’s chest.  My invisible hand punctures his steel chest plate and I feel what it is to die, to dissipate into nothing and vanish as if I never existed.

Reverie doesn’t move but is stunned.  Trace energy flickers inside his helmet.  I bounce off him and hit the ground running.  I make my way past him towards the shimmering door.  I can feel its light on my body, warm and welcoming.

Behind me is the ferocious lion’s roar accompanied by the crack of a whip.  I feel the stingers bite into my ankle.  My foot catches fire and disappears.  I fall on my face and start to crawl.  I can see my reflection in the door!   The whip tears across my back.

I roll across the floor now towards the door, towards life and then get up on my one foot.

I hear another crack of his whip as I leap towards the door.  I feel its sting as I break the portals plane.

As the light envelops me I am forced to ponder what will happen when a dream walks among men, breathes the same air, traces a finger down their cheek? The whispers aren’t telling.  The only thing I know for sure is that having felt what it was like to die; I know this is what it feels like to be alive.

It is wonderfully read by Cayenne Chris Conroy.

Go to Pseudopod.org and let me know what you think.

Also, check out the original artwork in my 1st post. 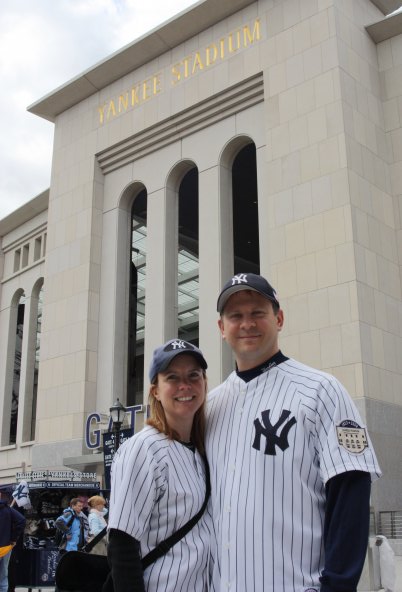 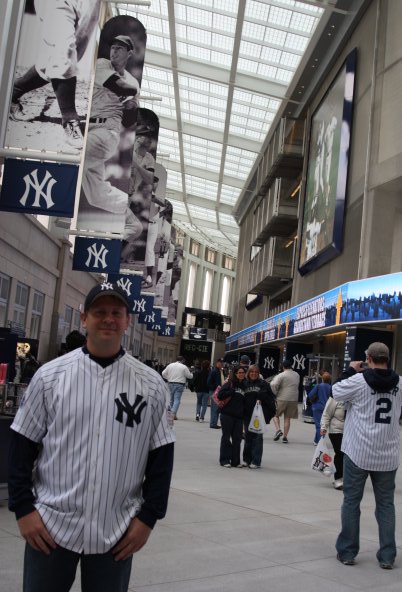 I have been to Yankee Stadium a few times now and I love it. The concessions are great, no wait to take a leak anymore, and no more being herded like cattle through tight corridors. I also love the sight line I have.

There is only one problem. It’s still not Yankee Stadium to me. I know it will be eventually but the only one I have ever known sits next door, an aging lonely ghost wishing to go peacefully to the other side. She moans in the wind dying slowly as every piece of her is ripped away and sold at unreasonably high prices.

My first game at the new stadium there was literally a huge black cloud that hung over the old stadium. Like the grim reaper it sat over head looking down and waiting. Get it over with. I can’t accept the new one whole heartedly until the old one is out of sight, where the only place I will see her is in my mind.