I wrote a vampire story in class this year and amongst the stiff competition of my classmates I actually won a vampire story contest.  This victory, however small, will remain on my mental resume forever.  Anyway, it’s a becomes bit of a comedy piece as it develops and I have finally revised it. I sent it out and now it has been accepted for publication.

If you want to read about Wraith and the mortal woman who stands between him and his dreams of power stay tuned to The Badgerine andhttp://bloodtouch.webs.com/abraxas.htm

My short story “‘Til Death” is now appearing in the summer issue of Dark Gothic Magazine.

Here is the link to an updated blog where you can purchase the story, or just get the gist of what its about:
(click below)

I wrote this about 2 years ago (most of my new stuff is out in cyberspace trying to get published).  I was told it had some nice writing in it but didn’t quite work as a story.  Looking back at it I think I agree but, I was put on a word limit so I guess it was a successful exercise.  Let me know what you think.

There is no color yet it is blinding.  There is no noise but the silent cries of the dead is deafening.  I don’t exist and it is maddening.  I am not in heaven, its promised kiss eludes me and I am not in hell for I don’t feel its icy sting.  Then I am summoned.

‘Welcome back to the land of the living.’ is his greeting.  It’s the same every time, that officious little prick.  He calls himself Lazarus but I know it’s not his real name.  I’ll learn it soon enough.  Then he will suffer.

I don’t know how long I have been dead.  Lazarus has command over my soul and has imprisoned me.  ‘I have need of your abilities again.’  He speaks behind a pane of black glass, his voice distorted and mechanical.  The glass is painted with symbols, triangles and goat heads, swirls and stars.  I cannot approach.  I have tried but it lights my soul on fire.  The pain is excruciating, it is like nothing I could have imagined when my body was flesh.  God, I will make him suffer one day.

He wakes me from my purgatory, gives me orders that I must obey, only to be imprisoned again.  ‘There is a new threat.  Kill him.’  The command is cold and simple.  The target appears to me in my mind and I am off.

The night is crystal clear.  The moon and the stars bathe me.  I can feel their luminescence surging through me, light-waves bending in endless cycles of bright and brighter.  I burn and my soul cries out for salvation but there is never an answer.

I approach the house of my prey.  The front door is painted with simple talismans of half-moons and pentagrams.  Red paint, coarse and with dried smears, give the impression that these scriptures were written in blood.  My arrival is expected.

I pass through the door, the talismans don’t even sting, and I make my way upstairs.  The air shrieks as I travel trough it, then dies as thunderclaps.

My prey’s flesh ripens with sweat and gooseflesh.  I can see, no taste his fear.  I absorb its acid, rancor and I am not surprised that I have learned to like it.

I laugh.  It booms like tortured screams and pierces the prey’s soul like icy shivs.  I can smell urine running down his leg.  I can feel the beat of his heart.  His eyes grow wide.  He holds up the Jatuka Ramatep and I laugh harder now, at his pathetic charm, and the room trembles.

Nahema!  At last I have a name.  This must be who my captor is!  The prey is shaking now, on his knees praying, begging and crying.  Although he doesn’t know it, he has given me valuable information.  I decide to end his life painlessly.  I place my hands on his head.  My touch rots his flesh; it curls and gives off the sweet odor of decay.  Before he has a chance to scream, in one quick motion I twist of his head.  His soul passes me by, a whisper in a hurricane.

I begin to dissipate as I get summoned back to my prison.  It won’t be long before I am free Nahema, then you will know true pain.

My buddy, known as MERC (if he wants me to us his name I will) is quite the artist.  He has had a sneak peak of my story “Infestation” that will be published in June over at Pseudopod and I asked him to draw one of the little critters in the story.  This is a first draft he literally whipped up on loose-leaf.

He’s doing anther version that will have some of the more defining characteristics of the little guys.  What a challenge.  I appreciate this artistic version and wanted to share it online 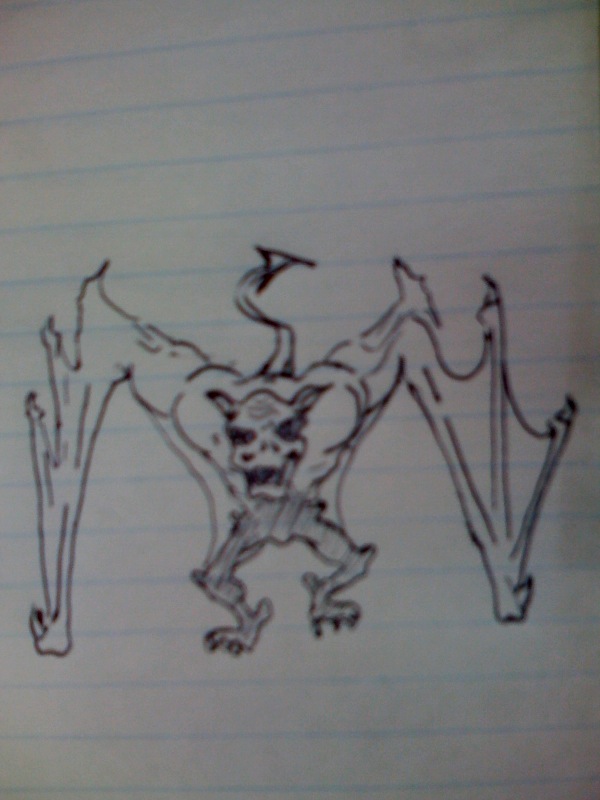 Two years ago I wrote my first story for my Fiction Writing Workshop class. Here it is in all of its unpublished glory.

She followed him up the walkway.   It was covered in slick, black ice, invisible and dangerous.  Slipping slightly, she reached out to hold his hand for support but they were hidden away, safe and warm inside the scratchy wool pockets of his pea coat.

Marcus’s breath puffed out in white, little clouds.  He watched them rise into the air and disappear into the dark, moonless, night over the bare birch branches that framed his walkway.  The branches stretched into the sky, reaching for his escaping breath.  They had no chance of catching their prey and he found himself oddly relieved at the thought.

“Be careful of the ice, Marla.”

“It’s Marissa,” she said as she twirled a strand of brown, shoulder length hair around her index finger.

Her response was a series of giggles that couldn’t sound more vacant than the starless night they floated off into.

He took her hand in his as he approached his front door.  A beautiful mahogany door with a large pane of frosted, beveled glass down the middle.  It was woefully out of place in the low-rent, section of Albany on Ford Avenue, where many of the college students lived.  He went to place his key in the doors lock but his hand was gently shaking to the rhythm of the flutters in his stomach.  Marcus casually wondered if it was the frigid winter air that seemed to blow through his ungloved fingers or if was a case of nerves that caused him to miss the keyhole.  What did it matter? he figured as he let go of her in order to use both hands to guide the key to its mark.  With a turn of the key the door unlocked but was stuck, possibly frozen shut.  Not to be denied entry Marcus pushed his foot against the bottom of the door and forced it open.

As he ushered Marissa in out of the cold his glasses quickly fogged due to the temperature change in his house.  The welcoming smell of radiator heat made its way into his nostrils and filled his chest with warmth as he blindly ran his hand up and down the hallway entrance wall where the light switch was.   After a moment, success as the pair of 60 watt bulbs burst into life in their bare fixture, then blinked on and off lightly as if struggling against the winter chill that blew passed it.

Marla’s cheeks started to redden in the warmth and she wore a wide smile.  “Your room-mates home?”

“No, they haven’t gotten back from Ralph’s yet.” Marcus said matter-of-factly as he removed his glasses to wipe of the fog on the white tee shirt he wore beneath his sweater to keep the itchy wool from his dry, winter skin.

“Yuck, you guys go that dive?”

Does she have to talk so fucking much? he thought to himself.  He took a long deep breath and held it for three seconds.  Relax he told himself.  You need this.  Marcus walked though the hallway and took his coat off and Marissa’s as well, then dropped them on the living room couch.

“Sure thing, it’s the first door on the left right here.”

They walked out of the living room towards Marcus’s room.  His hand, now turning pink as it warmed up in the heat, turned the clear plastic knob that tried but failed to imitate crystal, on his bedroom door.  The light in the hallway now blinked with greater urgency as if trying not to be snuffed out.

His bedroom door, much like the front door, was stuck.  This time a gentle push with his foot did little budge the barrier in front of him.  He lowered his shoulder and used his body weight to force the door open.  The heat that came through the open doorway was considerable and stale.

Marcus turned on his bedroom light and as Marissa and he entered his room the hallway light lost its battle and blew out for good.  The darkness seemed to creep, slither, and moan but Marcus quickly shut his bedroom door sealing it out.

“I wouldn’t want my roommates to walk in a see us.”

The room had the dim lighting of a funeral home; pale shades of yellow exposing the shadows that played hide and seek in the corners.  Streetlight stretched out through the spaces in the vertical blinds creating long white waves that exposed the flight pattern of the drifting dust.

The walls were cold and bone-white, decorated only by the black shapes that crawled across its canvass with every breeze or passing car.

“I usually don’t do this kind of…..” Marcus cut her off with a kiss.

He pressed his lips upon hers and she hungrily accepted him with kisses of her own.  Their tongues intertwined and seemed to fight with each other.  His hands made their way up underneath her shirt, up her smooth back, past her bra strap, to her shoulder blades.

She did not smell as expected.  Where he dreamed of vanilla and lavender he found a reality of beer and stale smoke.  Trying to block it out he removed his hands from beneath her shirt and ran his fingers through her hair.  Again he was sorely disappointed.  In place of gossamer and silk he found a tangled web of dried hairspray that he could not fight through without causing her to gasp lightly with discomfort.  His disillusionment quickly turned to anger.

As she fumbled with his belt buckle his ears ached to the beat of his pounding heart.  Now he pushed her onto his bed.  In the yellow light of his room she looked sallow and unattractive.  His stomach began to twist in agonizing convulsions.

Marcus turned his head to the side and vomited.  The pungent smell overpowered the small room and clung to the air as if alive.

Marissa screamed and jumped up from the bed.  Marcus quickly and brutally punched her in the side of the mouth.  A spattering of spittle flew from Marissa’s lips as she bit off a piece of her tongue.  Her mouth began to pool with warm blood that filled all the spaces between her teeth.

“I think it’s time you met my room-mates.” Marcus proclaimed wiping chunks of vomit from the corner of his mouth.

He opened his bedroom door and the darkness seeped in.

One of my favorite animal attack videos. Possibly the all-time greatest!

I am happy to say I have finally published a short story.  It will be appearing on http://www.pseudopod.org in early June.  It has some comedy, bugs, blood, and guts.  You guessed it, it’s a love story.  I hope you check it out and let me know what you think.